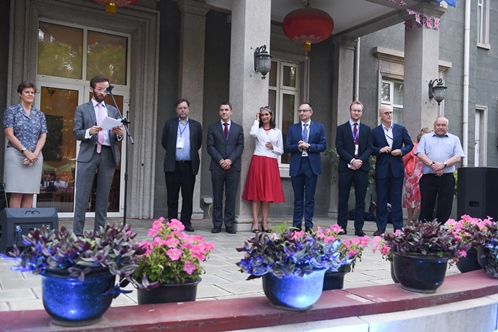 The British Chamber of Commerce in China will hold its 2018 Annual General Meeting (AGM) on Thursday June 7th from 1:30 – 5:00pm at the British Ambassador’s Residence. We encourage as many members as possible to attend both for the meeting, and the fantastic Summer Garden Party that follows.

What is an Annual General Meeting (AGM)?
The AGM is the Chamber’s most important business meeting of the year. It is where we review the activities for 2017/18 and look forward to the next year. The main goals of the event are:
–    A year in review
–    Chairman Report
–    Treasurer Report
–    Elect the Board of Directors; Chair, 2 X vice Chairs, Treasure and 6 X Executive Committee (Exco) for the year ahead

Who can attend the AGM?
Any employee from any of our member companies can attend – and it is fine to have multiple attendees from one company. No distinction is made between “CBBC members” and “BritCham members”. Individual members may also attend but may not vote. Non members may not attend!

Who can vote at the AGM?
Each member company has one vote. Each member company has one “nominated person” who is the main point of contact with the Chamber and normally this will be the person who attends the AGM to vote. However we can easily transfer the vote to another company representative if that person agrees. If more than one person attends from the same company then only one may vote – we will track this by giving voting members lanyards on arrival. Individual members do not have the right to vote.

How can I register to attend the AGM?

How do I get nominated?
Please submit Nomination Form 2018 to election@britishchamber.cn or in person at the British Business Centre.

What is the nomination process?
In order to be nominated for the British Chamber of Commerce in China Executive Committee, you must be proposed and seconded by two separate member company representatives before giving your own consent for the position you’d like to run for.

This is done by filling in Nomination Form 2018 with your name, member company and what position you want to run for (each candidate can only run for one position). The proposing and seconding representatives must all fill in the same form which then needs to be returned to BritCham at the above email address before the deadline.

The document must be filled in by hand by the candidate, then scanned and sent to the proposing and seconding candidate who fills in the form before being sent to the Chamber.

What is the deadline?
The deadline for nominations is Tuesday 29th May 5pm. Nominations after that time will not be accepted.

What is the Exco and why is it important?
The Exco is the Executive Committee of the Chamber – 10 elected members who meet each month to make decisions about the strategy, finances and activities of the Chamber. There are six “At Large” (general) committee members, two Vice Chairs, a Treasurer, and the Chair.

Who can stand for election to Exco?
See the answer above for “who can vote at the AGM” – it’s exactly the same. We welcome nominations from all member companies, and we can transfer the “nominated person” as required.

How does voting take place?
A full list of candidates will be published on Wednesday 30th May. Voting takes place in person at the AGM on Thursday 7 June. For those unable to attend in person, advance electronic voting will NOT be possible, however, a proxy will be available. Full details will be circulated when nominations have been received. Voting is secret, and the number of votes cast for each candidate is not announced, only the result.