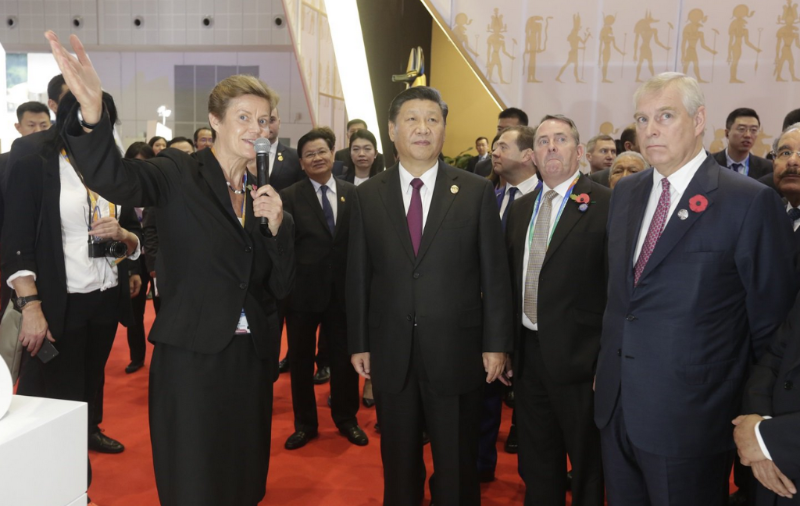 Representatives from 50 UK businesses and from government were welcomed to the China International Import Expo (CIIE) as “Country of Honour” last week.  Secretary of State for International Trade Liam Fox attended China’s inaugural CIIE event, which also welcomed the Minister for Trade and Export Promotion Baroness Fairhead and His Royal Highness The Duke of York.

The Pavilion saw such major names as ACCA, Alibaba Cloud, Anstee, Baosteel , Boots, BP, GSK, Lloyds Bank, The Premier League, Rio Tinto, the University of Buckingham and WorldFirst.  As a leading foreign investor in the oil and gas sector, BP has operated in China since the 1970s.  HSBC showcased its heritage in China as well as its central role in linking China with the world through trade and investment.  Additionally, GSK demonstrated how they are nurturing Sino-British exchange in the fields of health and economics.

China and the UK signed $105 million worth of deals in the life science, education and creative sectors, according to the British Deputy Consul General in Shanghai Tony Clemson in his interview with CGTN.

The CIIE was intended as a “key approach to show China’s firm support for free trade, economic globalisation and market liberalisation,” according to China’s Ministry of Commerce.  President Xi Jinping opened the week’s expo with a promise that China will buy over $30 trillion of goods and more than $10 trillion of services from other countries over the next 15 years, marking an increase on his previous guarantee that China was expected to purchase $24 trillion worth of goods from other countries over the same length of time.

“The CIIE has been a great occasion for British business to demonstrate the innovation, creativity and quality that are the hallmarks of UK industry and exports.

“The British Chamber of Commerce in China welcomes the pledges set out by President Xi, including that of addressing the trade imbalance by importing more foreign goods and further opening up sectors of the market for foreign business.

“Most notably, the announcement of further opening up in the education, medical service and culture sectors, where the UK are considered world leaders, is welcome, and we now look forward to more details around how this will be achieved.”

Secretary of State for International Trade Liam Fox added that “As we leave the European Union, we have a once in a generation opportunity to put the UK at the centre of the world’s fastest growing market – and increasing trade with China is at the heart of this vision.”