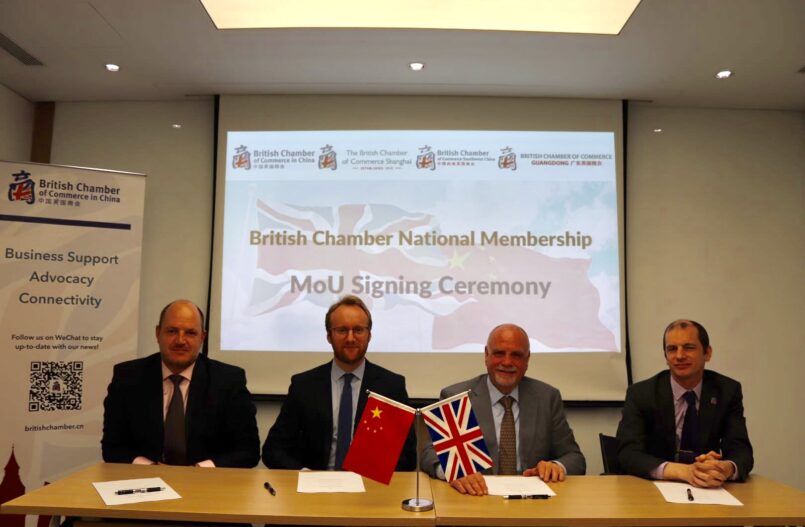 This is a historical milestone for British businesses in China. The closer ties between the four British chambers will provide a strong independent voice for the UK business community operating across China as the chambers collectively advocate for the interests of members.

The British Chamber National Membership will see the formation of a National Board, which will create a closer network across the chambers to streamline business support to member companies, giving access and insights across the country. The integrated platform will ensure UK businesses continue to thrive across a wide range of industries and sectors in China and allow British businesses to speak with a powerful unified voice from within China.

Dame Barbara Woodward DCMG OBE, Her Majesty’s Ambassador to the PRC welcomed and congratulated the nationwide cooperation between the four British chambers of commerce in Mainland China on “their agreement to come together and offer a national membership”. She highlighted that “a unified, nationwide voice for British businesses will lead to stronger and more consistent messaging at a time when government and business need to be working together even more closely. It is an exciting time for our work in securing more opportunities for UK business and a more conducive business environment.”

A critical focus throughout the work of the British chambers lies in advocating for the interests of members. With a total membership of over 850 companies, the new interconnection across the four chambers will deliver a single coordinated voice for UK businesses in China.

In a recent joint publication across all four chambers, British Businesses in China: Members Sentiment Survey 2018/19, 65% of foreign businesses voiced optimism about the business outlook for their industry over the next two years, and 67% intended to increase investment in China over the next 12 months. As positive sentiments and outlooks for doing business in China continue to thrive, we hope to expand our advocacy voice across the nation. The coming months will see the launch of the British chambers’ inaugural Position Paper, which lays out key recommendations the chambers have for the UK and Chinese governments to improve market access and business environment for British companies in China.

With the positive support and endorsement by Her Majesty’s Government and the British Chambers of Commerce in the U.K., the British chambers in China are confident and are looking forward to working cooperatively in the best interests of UK businesses, building an integrated platform for members and continue to expand and engage the network of British business leaders and experts in China, towards the common objective to strengthening Sino-UK bilateral relations.

“The British chambers of commerce across China have always delivered crucial support for UK businesses on the ground in China. With the joining of all four chambers, we hope that the BCCC will continue to generate success for UK business stakeholders. As Her Majesty’s Trade Commissioner, I welcome this streamlining of resources and voice, and look forward to working with its leadership to deliver improved business environment and market access.”

Her Majesty’s Trade Commissioner for China

“The historic coming together of the four British chambers of commerce in China is a timely and essential step to providing a true independent voice for British business in China. Increasing collaboration through our advocacy work, events and networking platforms can only bring further value to our members, while driving efficiencies to the chamber network. While much uncertainty remains in the UK around our future trading relations, the UK business community in China is organising itself to provide the best possible support to ensure UK businesses thrive across the Chinese mainland.”

Chairman of The British Chamber of Commerce in China

“The unique British chambers of commerce sit at the heart of a network of businesses across every region of China.  Working together with a common ethos of members helping members, independent of politics, our ONE synchronised voice can help achieve more than we could ever achieve alone.  National membership and formation of a new National Board is a natural progression towards seeing British business being represented by ONE Chamber of Commerce in China.  From today we will lead with a stronger synchronised voice to local, provincial and national governments and increase exposure, networking and business opportunities for our members.  We also anticipate future efficiencies service delivery, economies of scale and lower overheads by taking advantage of operating as ONE Chamber and sharing back-office operational costs. This is simply the right thing to and now is the right time to do it.”

Chairman of The British Chamber of Commerce Shanghai

“With a traditional manufacturing base increasingly supplemented by services and a cutting edge technology scene, Guangdong province has a rich and diverse economy in which UK companies play an important part. With the Greater Bay initiative bringing closer economic connectivity across Southern China, the closer integration of the four chambers of commerce can improve linkages for our members to tap into the pan China network and bring closer alignment between the British business communities across China. This is a hugely exciting step for the British business community and will undoubtedly bring benefits to UK business in Guangdong.”

Chairman of The British Chamber of Commerce Guangdong

The British Chamber of Commerce Southwest China has for over 20 years supported a vibrant British business community across the cities of Chengdu, Chongqing and beyond. As transport links strengthen and the region grows in importance more British businesses are moving into the area and it makes increasing sense to work closely at a national level. Being able to offer a national membership tier and speak with a common voice offers significant tangible benefits to all our members across China and we look forward to an ever-strengthening relationship.

Chairman of The British Chamber of Commerce Southwest China

About the four chapters of British Chamber of Commerce across China

With over two decades’ worth of business experiences in China, we have an extensive network and platform connecting with our members, partners and key business leaders. With a strong and diverse membership, the British chambers’ industry forums provide a critical platform for members to share insights, expertise and resources, and to discuss issues and sector-specific developments across China.

We are designed to support UK businesses, organisations and individuals grow in one of the world’s fastest growing economies.