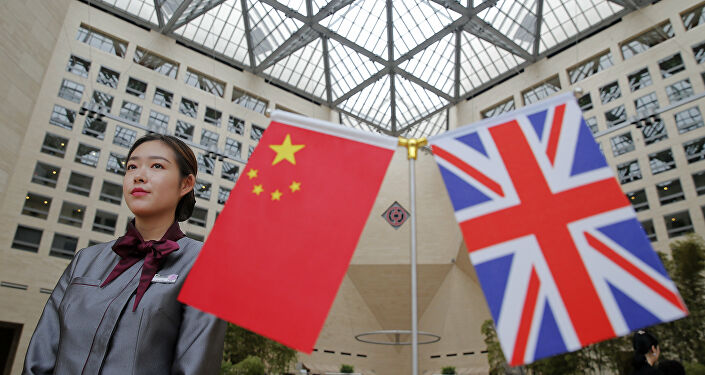 The following is an excerpt from our upcoming Position Paper, to be launched on the 26th May. Click here to sign up to the launch event.

Global Britain in a Competitive Age: The Integrated Review of Security, Defence, Development and Foreign Policy, a policy document that outlines the UK government’s outlook on international relations, characterises China as the UK’s “biggest state-based threat to economic security”. However, it also emphasises that this does not preclude the development of positive cooperation in areas of mutual benefit, such as trade and climate action.

Over the past year, the UK’s total trade in goods and services with the Chinese mainland reached almost GBP 79 billion (RMB 713 billion) in 2020, with an additional GBP 21.9 billion (RMB 197.6 billion) generated in Hong Kong.

This represents a drop of 8.5% on 2019 levels, but is notably shallower than the drop in the UK’s total global trade, which was down 17%. China rose above the Netherlands to become the UK’s third largest trade partner in 2020, driven partly by UK demand for products related to COVID-19, such as medical masks and electronics.

China was previously thought to be the UK’s fifth largest trading partner in 2019 but, revised UK government data now indicates that it narrowly beat France to place fourth. It remains behind the US, which accounts for 22% of the UK’s total global trade in goods and services. As our second-largest trading partner, Germany’s share of the UK’s total global trade stands four percentage points higher than China’s, at 13% as compared to 9%. Japan is the UK’s next largest trade partner in the Asia-Pacific, but is only our eleventh-largest trade partner overall, with the relationship generating GBP 24.6 billion (RMB 222 billion) in trade in 2020 – a third of our trade with the Chinese mainland. 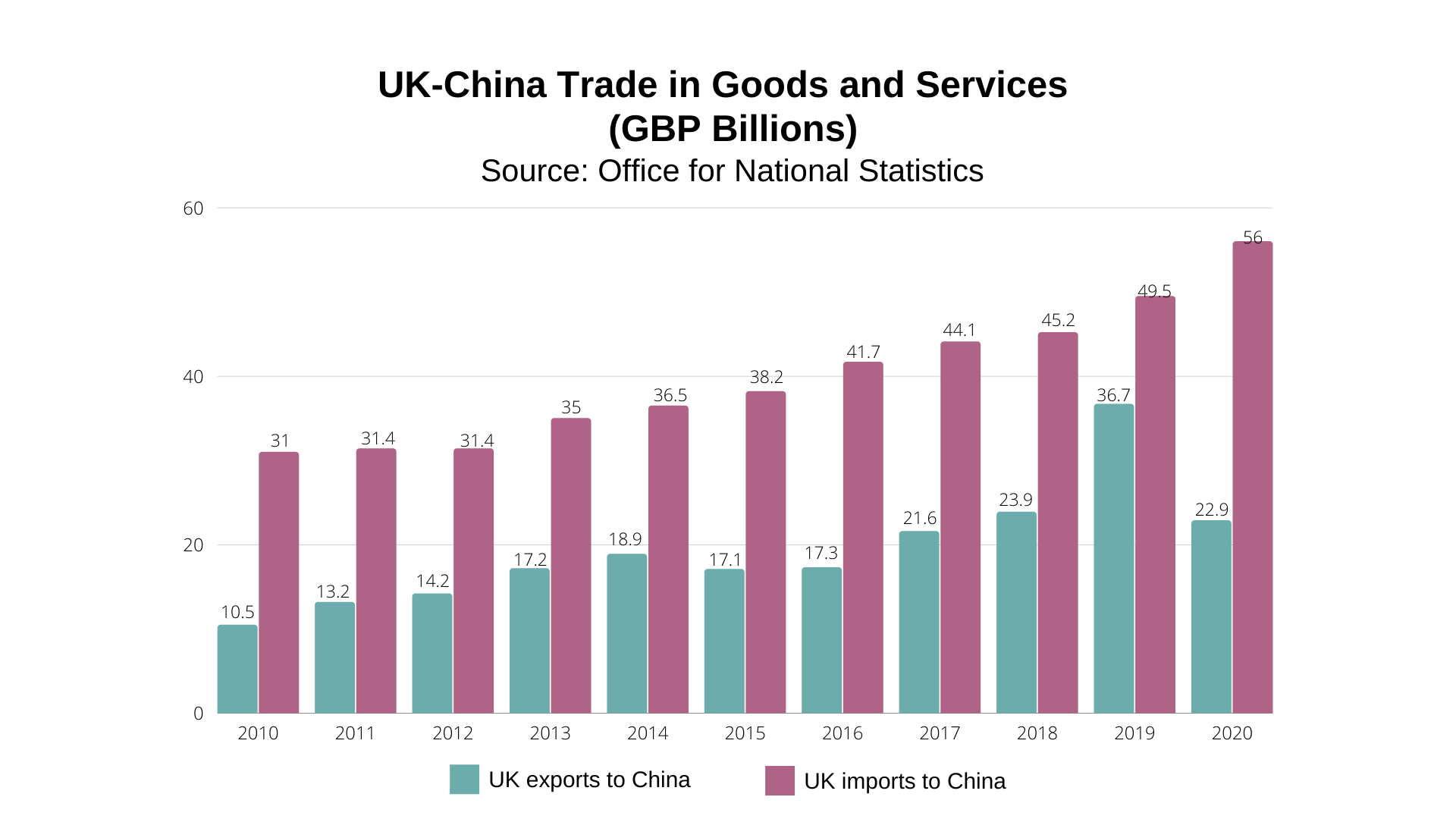 The mainstays of UK goods imports from China in 2020 were telecoms and sound equipment and office machinery, with consumer electronics demand strengthening through the pandemic. Major UK goods exports to China include crude oil, road vehicles, and medicinal and pharmaceutical products, with the share shipped to China standing at just under 10% of the UK’s global exports for those categories.

In services, exports to China grew almost 250% between 2010 and 2019. The most significant of these are in ‘other business services’ (comprising of accounting, legal, advisory, built environment and other such services), which account for over a quarter of all of the UK’s services exports to China. Other significant categories include intellectual property, transportation, travel and financial services.

While the UK currently runs an overall trade deficit with China, growth in the UK’s goods trade deficit pre-pandemic was narrowing, while its surplus in services was widening. These trends may continue in the post-COVID environment, especially if China continues to open its services markets.

This last category is worth almost the sum of the traditional metrics, doubling previous estimates of UK exports of services to the Chinese mainland in 2019 to over GBP 10 billion (RMB 90.2 billion) in total.

Nevertheless, there is significant room for growth in trade generated by British-owned foreign affiliates – the UK’s trade with China in services is lower than other markets in the region and for what would be expected of an economy of China’s size.

Recent trends of British FDI into China also show a bullish trend. Total British FDI stock in China stood at GBP 10.7 billion (RMB 96.6 billion) at the end of 2020. Recovering from a dip in 2019, British investment into China is reported to have grown by 30.7% last year, and British businesses will be maintaining or growing their current investment in China in 2021, according to the latest edition of the British Business in China: Sentiment Survey. Moreover, challenges in the political relationship have not discouraged the Chinese government’s interest in attracting further investment from the UK, as seen in a recent circular.

Greater market openings, particularly in the services sector, would allow China to grow jobs, source foreign investment and improve the competitiveness and innovativeness of its business environment. Nevertheless, there are concerns that at any time individual companies may be disadvantaged due to geopolitical tensions. In China, British companies in the technology industry, food and beverage industry and others have reported delays to receiving licences.

In addition, the role of foreign businesses in China is not defined in the dual circulation strategy, causing uncertainty about potential risks around policy decisions made on the basis of economic or national security. Similar concerns may be held by Chinese companies in the UK. Foreign investment ultimately generates jobs, provides greater consumer choice and supports economic growth. Decisions to limit an individual company’s access to a market that are not based on objective, evidence-based reasoning harm all parties involved.

Business-to-business and people-to-people exchange is invaluable to facilitating better understanding in the UK-China relationship and informed economic cooperation. For example, joint exploration of new programmes around green finance and investment can lead to greater uptake by British and Chinese industry giants, many of whom are already showing increasing appetite for improving their Environmental, Social, Governance (ESG) standards.

There will always be disagreement in a bilateral relationship, but disengagement is not the solution. Economic exchange is invaluable, building the goodwill needed to manage more challenging areas. Throughout 2020, the UK and China have continued to build joint mechanisms that promote knowledge-sharing and develop green, fair and open trade. Continuing such projects and maintaining a balance between robust discussion around our differences and engaging on our common interests is the critical.

British Business in China: Position Paper 2021 is launching on Wednesday 26 May, at Hotel Jen Beijing. Click here to sign up to the launch event. 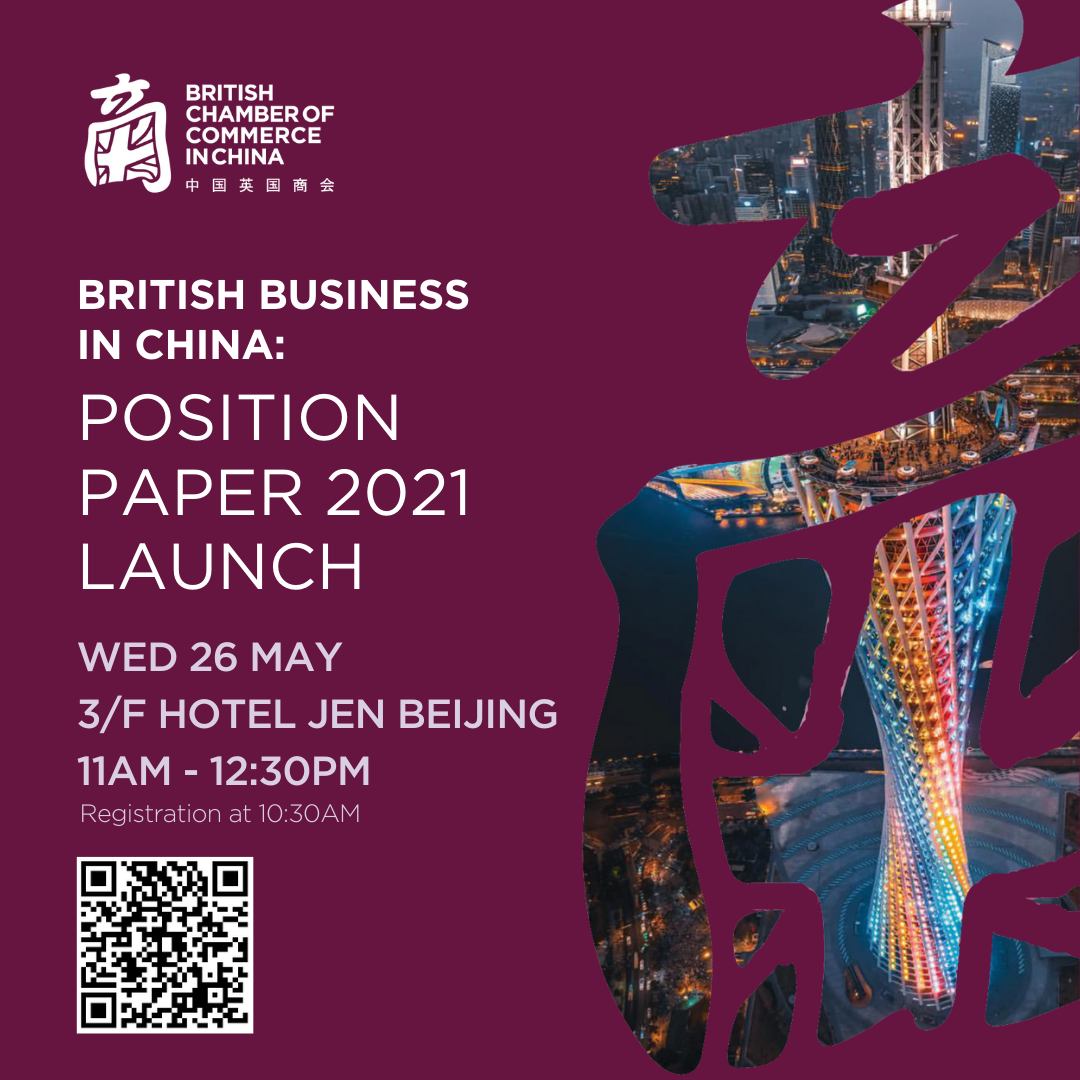