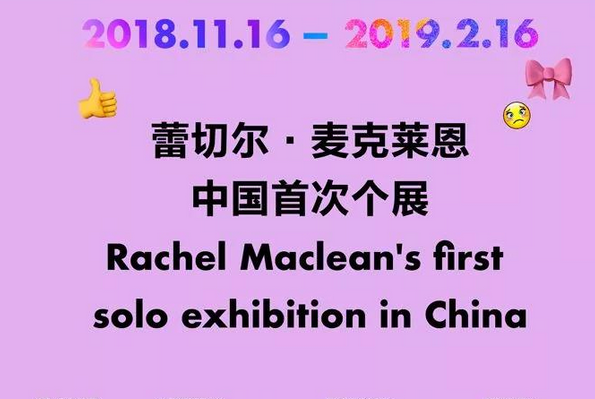 KWM artcenter is pleased to present Rachel Maclean’s first solo exhibition in China from 15 November 2018 to 16 February 2019. The exhibition presents 2 film installations, a set of digital prints and a newly commissioned VR work from the Zabludowitz collection in London. The aim of the exhibition is to introduce Maclean’s practice to a new audience. Social media, advertising, children’s television programmes and fairy tales appear regularly in Maclean’s work highlighting the key themes of identity, gender, consumerism and our dependence on technology.

Rachel Maclean is considered one of the most important and distinctive artists at work in the world today. Playing many of the costumed characters herself in her films, Maclean fuses both comedy and horror acted out against hyper-real worlds using green-screen video and computer animation. Her work is a powerful satire of contemporary society exposing all its colourful and alluring yet grotesque aspects.

In the main space we are exhibiting the film installation It’s What’s Inside That Counts from 2016. The film borrows techniques that global corporations use to sell well-being, youth and happiness by flooding us with imagery and feeding our anxieties. Playing all of her characters herself, Maclean uses green-screen backdrops to create forbidding animated environments. We want Data, a set of 6 digital prints, accompanies the film and depicts a Kardashian-type demigod in a dystopian metropolis obsessed with connectivity who rules over the masses fed on digital detritus.

In the education room we are showing Feed Me, a 2015 film, in which Maclean plays multiple characters including a pre-teen social media fanatic, a middle aged media business man, and a doe- eyed children’s entertainer. The film follows the marketing logic that to attain happiness we must follow our desires. It asks the question of what happens when our desires lead us to wanting more creating ever more unattainable dreams.

In the third room we show her newest work, a VR project commissioned by the Zabludowitz collection  entitled I’m Terribly Sorry (2018), made in collaboration with Werkflow. The interactive experience is set in a dystopian urban British landscape of manic tourist merchandise. It reflects on societal unease and misunderstanding in a culture of relentless documentation, self-performance and voyeurism.

Her work A Whole New World won the prestigious Margaret Tait Award in 2013, she has twice been shortlisted for the Jarman Award, and achieved widespread critical praise for Feed Me in British Art Show 8 in 2016. She has also worked on a number of TV commissions with BBC Scotland and Channel 4, which include ‘Billy Connolly; Life of a Portrait’ 2017 and ‘Rachel Maclean: The Shopping Centre, Artist in Residence’ Firecrest Films and Channel 4 (2018).

Maclean represented Scotland at the Venice Biennale 2017 with the newly commissioned work Spite Your Face, on view in Chiesa Santa Caterina. Commissioned and curated by Alchemy Film and Arts, in partnership with Talbot Rice Gallery and the University of Edinburgh. Her most recent film and TV project with BBC and Hopscotch Films, 14-18 Now, Make Me Up (TV film version) will be broadcast on BBC 4 in November 2018. It will receive its world film premiere in London BFI London Film Festival in the Experimental programme and will be screened in cinemas and arts centres throughout autumn 2018.

The KWM artcenter opened on 20th October 2016. It is located on the second floor of the WFC centre CBD in Beijing. The Art center is supported by the law firm King & Wood Mallesons. The KWM artcenter presents and promotes artists both domestically and overseas as well as building up its own collection. In particular, it acts as a rare art institution at the heart of the economic central area in Beijing. It provides high-quality art educational activities and courses aimed to cultivate art lovers and collectors. It serves to improve the international influence of Chinese Art and become a powerful communicator of Chinese Contemporary Art.