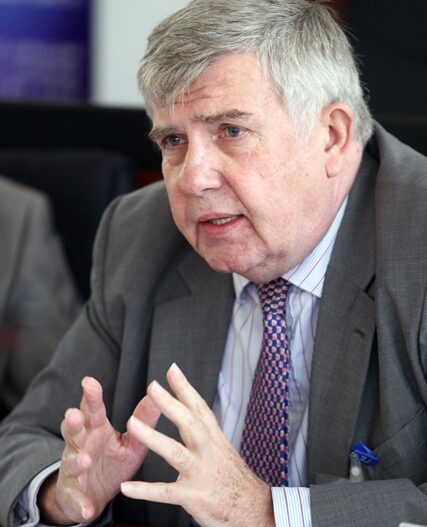 It is with great sadness to the everyone in the British business community here in China that Brian Outlaw passed away earlier this month.  Brian will be missed as a gentle giant who served and inspired the European and UK communities in China through many turbulent times.

Brian joined BP in 1988 and became President of China, being responsible for all of BP’s activities in China and Hong Kong.

Brian previously worked in the oil industry for the Burmah Oil Company, British National Oil Corporation and Britoil in Australia, Malaysia, Indonesia, Thailand and the North Sea.  While in these roles he served in a number of exploration and management positions, and had extensive experience in both onshore and offshore operations.  Brian joined PowerGen as Country General Manager, China and Korea in 1996, led the acquisition of a 530 MW gas-fired power plant in Korea and led negotiations on a number of projects in China.

With 30 years of experience in China, Brian was a wise mentor for those endeavouring to enter the Chinese market. He would be too humble to accept being called a Chinese Expert, although those who knew him best would not disagree with the title.

Brian graduated from the University in Aberdeen with a degree in geology, so it is no surprise his professional life led him into the petrochemical Industry.

From a recent tribute from the EU SME Centre:

Brian was a key founder of the EU SME Centre and worked closely with the implementing Chambers of Commerce and the European Delegation, to establish the structure of the project. He saw it as self-evident that by working together, the existing European chambers of commerce could add significant value to European small businesses by sharing knowledge and complementing each other’s activities. “There’s no need to re-invent the wheel” was one of his oft-used phrase or indeed  Ïf it ain’t broke, don’t fix it!

Brian was a great inspiration to the many members of Chamber and the local community, a dynamo of gentle energy. Will be sorely missed but well remembered.