What does the Government Work Report 2020 mean for British businesses? 22nd May 2020

Premier Li Keqiang outlined the Chinese government’s key priorities for 2020 in his presentation of the Government Work Report this morning. The report put an end to weeks of speculation about whether or not GDP growth targets would be abandoned, but on the whole, government policy this year should largely benefit British businesses in China, as long as they are accompanied by consistent and rigorous implementation. 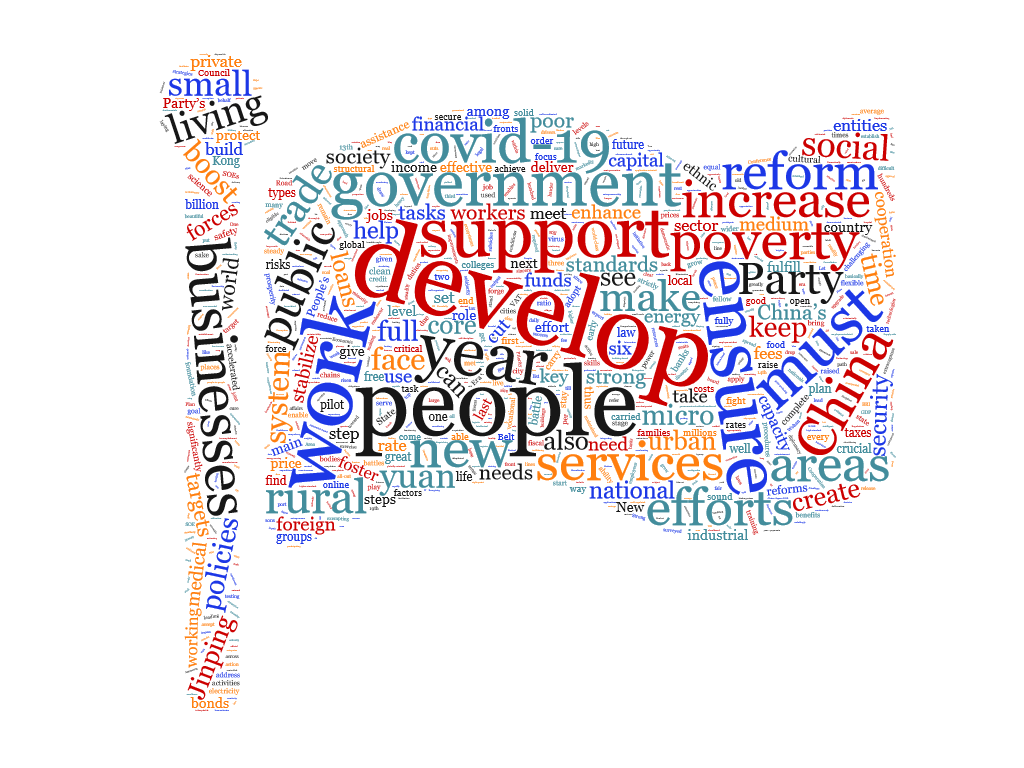 Most frequently used words in the Government Work Report

In the British Chamber’s last Policy Insights, we raised the possibility that the fiscal deficit ratio would exceed 3% of GDP, and predicted that a focus on the ‘three tough battles’, the ‘six priorities’ and the ‘six stabilities’ would be a core theme throughout the work report. We also personally believed that, amidst contentious debate among current and former officials in the lead up to the Two Sessions, China would keep a GDP growth target, albeit one that was revised downwards.

However, the government has not set a growth target for this year, citing the challenges of the “COVID-19 pandemic and the world economic and trade environment” as the core reasons behind this. Although it was unexpected, we welcome this decision. The removal of a growth target for 2020 should reduce the incentive for government bodies to artificially boost  economic growth, leading to a greater focus on improving the domestic business climate and on improving the ability of foreign businesses to assess the market.

Instead of building ‘bridges to nowhere’ – flashy infrastructure projects that look good on government balance sheets but ultimately don’t benefit the economy – the government is likely to instead increase spending on encouraging employment and raising people’s incomes, particularly in rural areas. Premier Li reported that 13.5 million jobs were created last year, but the COVID-19 outbreak has pushed the official unemployment rate to a record high of 6.2%.

With no growth target this year, higher employment levels will be a key indicator of the strength of the economy and the efficacy of the government’s recovery policies. While the work report is high-level and doesn’t give many specifics on how exactly unemployment will be addressed, businesses can expect significant incentives for expanding their workforce. Finance Minister Liu Kun confirmed after the session that this may come in the form of more cuts to fees and taxes, building on the reforms to VAT, Individual Income Tax and other tax systems in the past few years.

In light of the impact of COVID-19 on the economy, the Chinese government has also taken a more flexible stance on wider fiscal spending. The fiscal deficit ratio has been raised to 3.6% of GDP – above the previous red-line of 3% – granting the government more room to use consumption coupons, special purpose bonds and other policy tools to stimulate economy growth. It remains unlikely that there will be a return to the stimulus policies seen at the Global Financial Crisis, however, and the government will aim to cut non-essential expenditure by 50%.

Who will get more assistance?

Micro, small and medium-sized enterprises (MSMEs) have been promised more access to loans. Premier Li has urged banks, the largest of which are all state-owned, to set a target to raise lending to MSMEs by 40%. However, British MSMEs have found it difficult to access current special loans in the past, and unless there are clear pathways for them to receive these loans, they may not be as beneficial as the government hopes.

The retail, food and beverages and tourism sectors have also been reaffirmed as the key beneficiaries of stimulus measures. Although there have been reports of individuals ‘gaming’ the consumption coupons system, the government is likely to keep issuing these coupons to prop up embattled consumption services businesses. 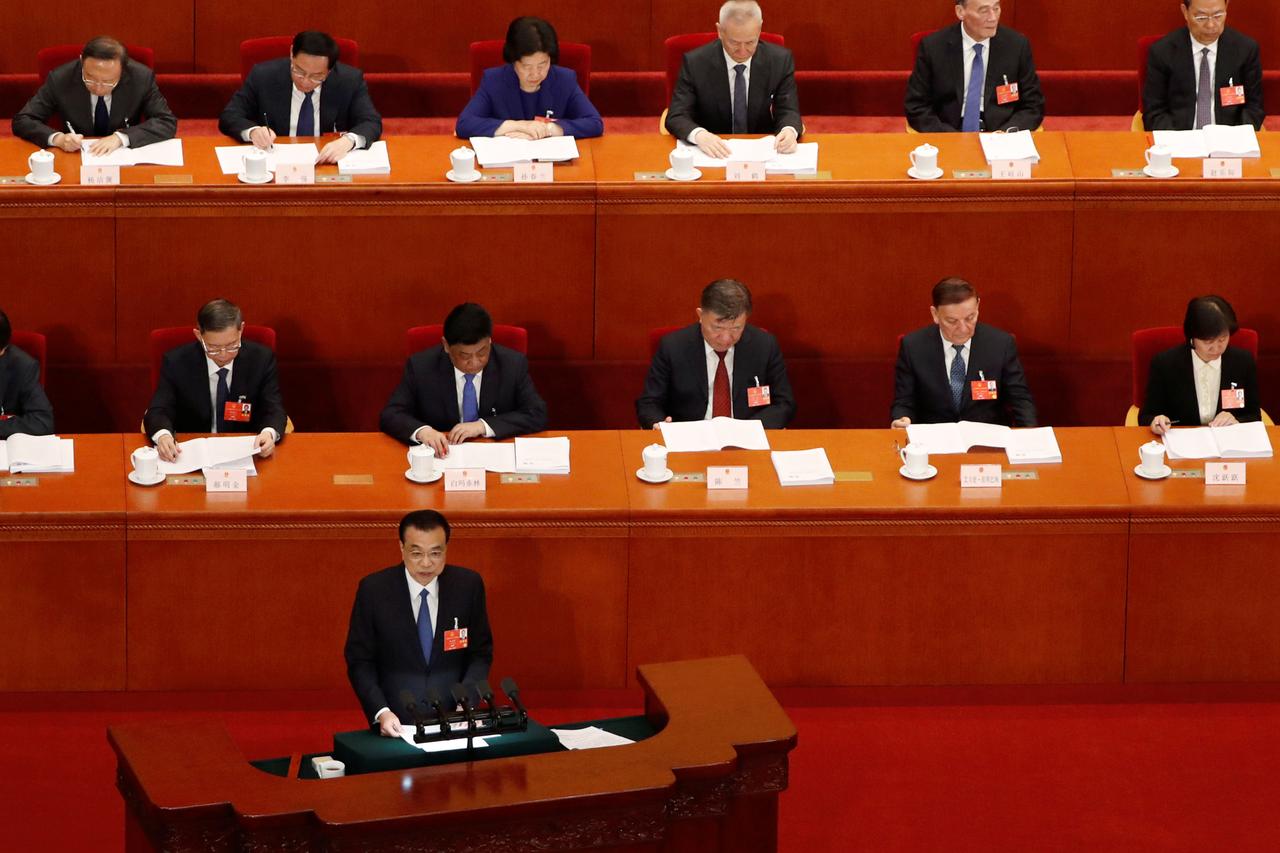 Opening up of business environment continues, although e-commerce may face challenges

In the past few months, several key ministers have reaffirmed the importance of foreign trade and investment to China’s economic recovery. As such, the report highlighted the importance of further opening up to foreign businesses. While he didn’t announce any new policies on business environment reform, Premier Li re-emphasised that ‘Negative List for Foreign Investment’ will be significantly shortened, allowing foreign businesses to invest in more sectors. This has been a core concern for British businesses, as raised in the Chamber’s Position Papers.

Accelerating the growth of cross-border e-commerce will also be a key policy focus. However, a negative list will also be developed for cross-border trade, which could impede what is in some areas a relatively efficient means for British companies to sell their products in China.

Free trade zones (FTZs) can also expect a higher level of autonomy to further reform their business environment. FTZs are valuable pilot sites for new reform measures, many of which bring tangible benefits to British companies in China. These range from the simplification of the business licence approval system in Shanghai to the expedition of approvals of pharmaceuticals and medical devices for use in Hainan. However, seven out of ten British businesses do not have a presence in FTZs and may question the tangible benefit of sustained openings of national FTZs to their business operations.

The Government Work Report has demonstrated a sober response by the Chinese government to the challenges posed by the COVID-19 outbreak. On paper, there are several measures that could have a meaningful impact on the ability of businesses to recover and thrive in China. However, as with all things, implementation is paramount. British businesses will be monitoring policy developments over the next few months to ensure they will enjoy equal access to these benefits, and that reductions to the ‘Negative Lists’ will be released shortly. 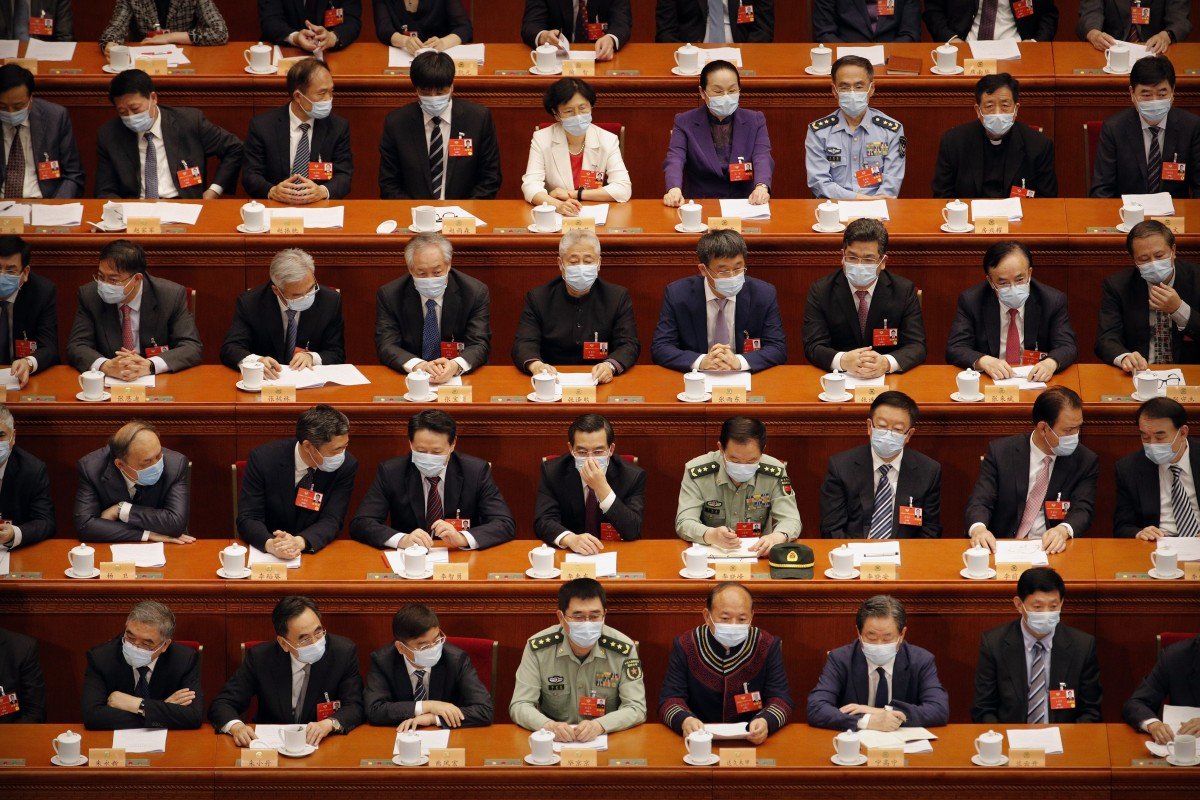 Other things to note:

For a thorough breakdown of what the Two Sessions outcomes mean for your business, join our online discussion on 28th May with renowned thought leaders on China’s political, economic and business landscape.